Before pondering the metaphor of “Digital Alchemy” we use in this course, we ought to step back and pry open the box of understanding on what is alchemy itself.

Now hold off on the quick googling. Anyone can do that.

This exercise, being conducted live during our NetNarr class on January 29, is a chance to use the web annotation tool hypothesis to discuss this topic– right along side this web page.

Just open the tool drawer in the top right of this page, and make sure you are logged in to (or create an account for) the hypothes.is tool.

Who are we? Maybe we annotate this with our own introductions, where in the world we are annotating from, what we know of, or think of as alchemy. Click that yellow text, watch the annotation tool open, and add your own response or reply to someone else.

Ahh, but we are not alone! We have invited two special guests to meet us about the same time (or sooner or later) who have some valuable expertise. I am betting they might annotate their own bios to say hello, or you can annotate to ask them questions.

Select text, then click the annotate button. Write away!

Look for existing annotations to add to (yellow highlights). Or select a new portion of text you wish to add notes too, and click the Annotate button. 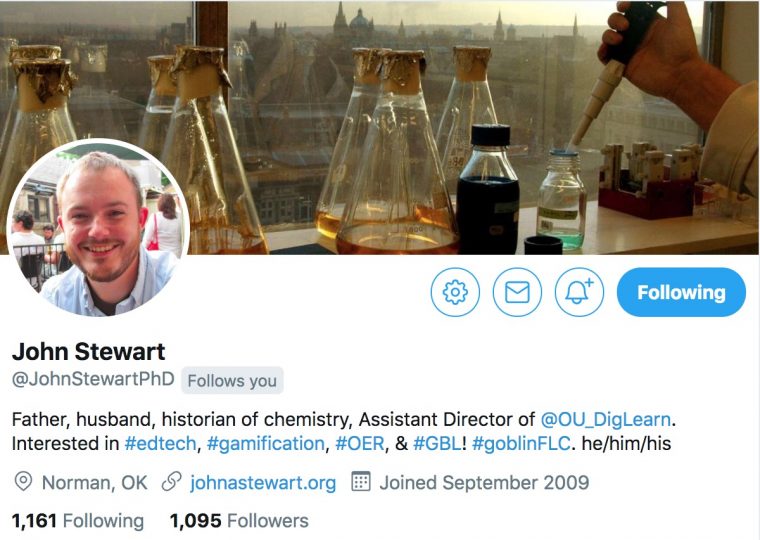 I have been the Assistant Director for Digital Learning at the University of Oklahoma’s Center for Teaching Excellence for the last year. There, I help to maintain the University’s Domain of One’s Own” project, OU Create, and help instructors integrate digital tools into their courses. Before that I taught the History of Science at OU and Missouri University of Science and Technology. My speciality is the history of chemistry from ancient Greek alchemy to the birth of organic chemistry in the 19th century. The history of science helps us to understand the intellectual, economic, political, and social development of the modern world.

Did you catch that?… “the history of chemistry from ancient Greek alchemy to the birth of organic chemistry in the 19th century” John is the real deal expert. Check out his blog http://www.johnastewart.org/. 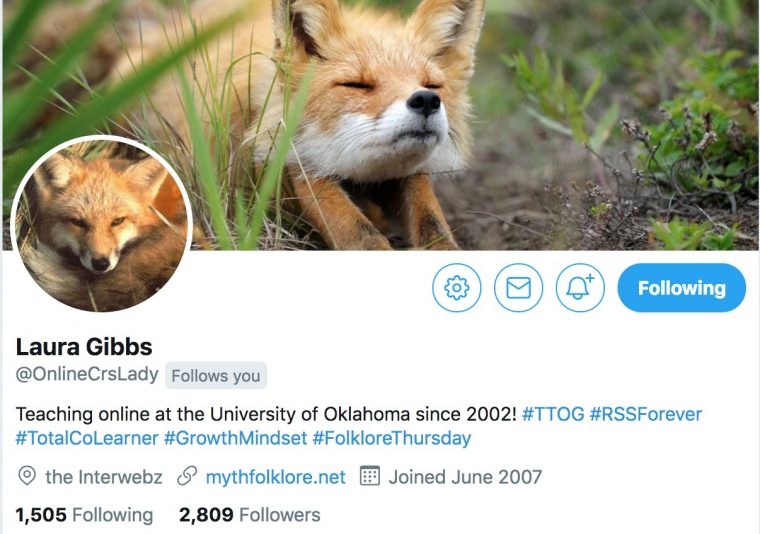 I’ve been teaching fully online classes at the University of Oklahoma since 2002; the courses I teach are “Mythology & Folklore” and “Epics of Ancient India: Ramayana and Mahabharata.” More about all that at MythFolklore.net. Before I started teaching online, I taught Latin and Greek, and my main area of interest was Aesop’s fables. I love Latin fables, proverbs, riddles, mottoes, emblems, and symbols, hence my interest in alchemy. If you are a student or teacher of Latin, you might enjoy my Latin blog: Bestiaria Latina, which you can find at BestLatin.net.

Laura has done some participating in NetNarr- see her fantastic #netnarr blog posts. And ask her about Latin cars!

John was kind enough to share some starting thoughts to get your thinking and annotating going.

I just started reading through r/alchemy [on reddit]. It’s so strange. It seems like there are still a good number of practicing alchemists, a lot of people who see it as a spiritual metaphor, and a lot of people just watching and trying to figure out what’s going on.

It might be worth poking around there, just to pull out some of the meta-narratives and to discuss digital personas.

Carl Jung’s works seem to still hold a lot of value for the people you find on reddit.

For actual history of alchemy, I’d watch the lectures by William Newman and Larry Principe. Their books and articles are a great resource for understanding both the practice and intent of alchemy.

Does this give you some ideas or questions about what alchemists did or thought about?

What do you know of the science if Isaac Newton– did you know about this alchemist side of him? To learn more, perhaps explore The Chymistry of Isaac Newton:

Isaac Newton, like Albert Einstein, is a quintessential symbol of the human intellect and its ability to decode the secrets of nature. Newton’s fundamental contributions to science include the quantification of gravitational attraction, the discovery that white light is actually a mixture of immutable spectral colors, and the formulation of the calculus. Yet there is another, more mysterious side to Newton that is imperfectly known, a realm of activity that spanned some thirty years of his life, although he kept it largely hidden from his contemporaries and colleagues. We refer to Newton’s involvement in the discipline of alchemy, or as it was often called in seventeenth-century England, “chymistry.” Newton wrote and transcribed about a million words on the subject of alchemy. Newton’s alchemical manuscripts include a rich and diverse set of document types, including laboratory notebooks, indices of alchemical substances, and Newton’s transcriptions from other sources.

Some more jump off points for commentary by John:

I think the broader metaphor of alchemy centers on purification and the study of improving nature. There were religious debates in the medieval period as to whether man could actually improve nature; can art supersede the craftwork of God? Low-level, practical alchemy focused just on improving grain into bread, grapes into wine, yarn into nice looking clothe, curing the sick, etc. High-level alchemy could probably be summarized as superseding the art of man and achieving the divine: immortality, infinite wealth, infinite knowledge, etc.

For some more discussion ideas you may want to review the responses from the 2017 Twitter chat we held with John and Laura on What is Alchemy.

The Wikipedia article is a place many might start in their understanding of alchemy:

Alchemy (from Arabic: al-kīmiyā)[1] was an ancient branch of natural philosophy, a philosophical and protoscientific tradition[2] practiced throughout Europe, Africa, and Asia,[2] originating in Hellenistic Egypt (primarily Alexandria) between the 4th and 3rd centuries BCE.[3][4] It aims to purify, mature, and perfect certain objects.[2][5][6][n 1] Common aims were chrysopoeia, the transmutation of “base metals” (e.g., lead) into “noble metals” (particularly gold);[2] the creation of an elixir of immortality;[2] the creation of panaceas able to cure any disease; and the development of an alkahest, a universal solvent.[7] The perfection of the human body and soul was thought to permit or result from the alchemical magnum opus[2] and, in the Hellenistic and Western mystery tradition, the achievement of gnosis.[6] In Europe, the creation of a philosopher’s stone was variously connected with all of these projects.

But where else might one look for background and understanding?

Where in the World and When did Alchemy start?

Are some of the places mentioned unexpected? Would alchemy mean exactly the same in all these contexts?

A1) About 600BC-1900AD and all over the world. China, India, Middle East, Europe, North and South America #netnarr

A1 #netnarr a great thing about alchemy: it spread far and fast, lasted long…and much was discussed in international language of LATIN 🙂

Alchemy supposedly died around 1700, but it was clearly practiced throughout the 18th c. and into the 19th #netnarr https://t.co/4ZfIiIhD2H

That’s rather interesting that alchemy is not just an ancient practice, what might you want to know or share about more recent or modern practices? What does it look like in 2019?

Alchemy died because it was too expensive and did not provide good results. There were more useful alternatives #netnarr

What kind of practice is alchemy? What discipline is it closest to?

Q2: What is your understanding about the basis of alchemy? Magic, chemistry, immortality? Please clarify. #NetNarr

So in the beginning it was just “the chemistry”?

Alchemy comes from "al" the Arabic version of "the" and "chemy." It was just "the chemistry" until it became a bad word. #netnarr https://t.co/UtjFy52OWx

What else do you want to know about Alchemy?

We have some expertise in the annotation area- ask away there.

Featured image: You might not consider Alexander Graham Bell an alchemist, but his notes indicate attributes of what us alchemists do, share our ideas in writing and sketches. AGBell Notebook Wikipedia Commons image shared into the public domain. 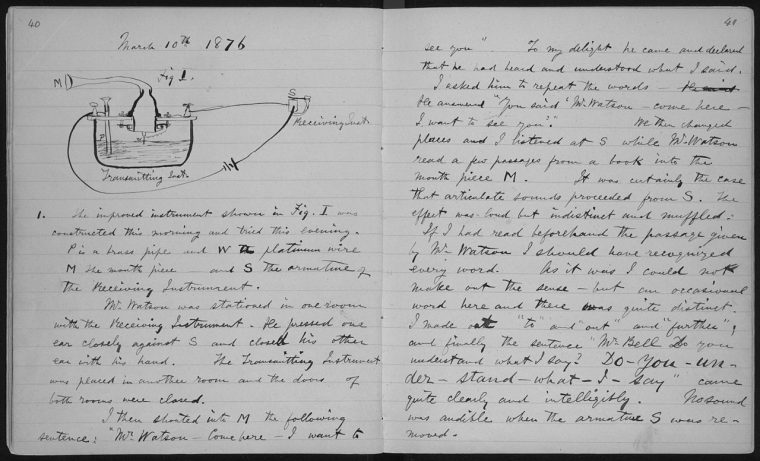