In our third studio visit meet with Amy Burvall and Michael Branson Smith, both are educators and visual artists with creativity and ideas about animated GIFs.

Amy and Michael will join us via Google Hangout February 26 at 6:30PM EDT in a session scheduled during Kean University class time.

You can watch the hangout live from here (which will also be the archive after the visit). We encourage live tweeting as well via the #netnarr hashtag. 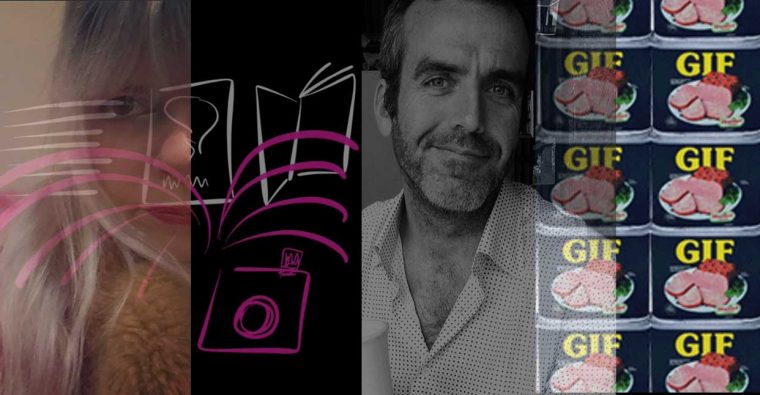 Michael Branson Smith is an Associate Professor of Communications Technology at York College/CUNY. He makes GIFs, works with archives, and teaches web design/development.

Some GIF works include

See also his collection Net Art resources (including the mobile apps he mentioned during the visit) and the NYPL Sterograminator tool for making animated GIFs from old stereographic images.

Amy Burvall is a professional recombinant, frequent flâneuse, and itinerant artist. After 25 years in the classroom she is currently consulting, creating, and curating in the fields of creativity, visual thinking, and digital literacies. She was an early YouTuber with her History for Music Lovers project (“Historyteachers”) and remains an advocate of remix in learning.

The cloud is our campfire where we tell stories w/ every status, photo, tweet. #BLC14 pic.twitter.com/rD2G4cRXgx

Her tagline, “the cloud is our campfire”, alludes to her passion for transparency and networked knowledge and curiosity.

Amy speaks and leads workshops internationally and enjoys designing creative spaces and facilitating experiences for the education and corporate sector. She is a fellow of the Royal Society of the Arts (UK), an Apple Teacher, and a Google Education Innovator. She authored several traditional and blended learning curricula for the global innovation start-up, EdgeMakers. She is co-author of Intention: Critical Creativity in the Classroom (2017, EdTechTeam Press).

She tries to see the beauty in the mundane and live life in “rigorous whimsy”. In the ether you can find Amy sharing her work @amyburvall in all spaces

Lately she has used gifs: